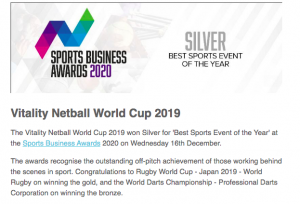 We’re very pleased for our friends in England Netball and the International Netball Federation (INF) for coming second in the prestigious Best Sports Event of the Year at the Sports Business Awards yesterday.  The Netball World Cup is the INF’s flagship event and this, the 15th edition of the event, was the culmination of four years of major event planning by England Netball, Vitality Netball World Cup 2019 (VNWC2019) and the INF. The scale, stature, and success of the event exceeded all expectations. We are also pleased to have played a role in this great event, in a great venue in the great city of Liverpool!