PI and rEvolution Taking The Reins at Tokyo 2020

PI and rEvolution Taking The Reins at Tokyo 2020

When it comes to sports, UK companies are gaining a growing international reputation for excellence. Sports media and sports marketing are no exception to this welcome trend, and two London-based companies have linked up, through their Directors, to bring this expertise to the biggest sporting event of all, the Olympic Games.

Pearce International (PI) is a well-known player in the niche area of media operations – giving the accredited media at a sporting event the tools to do their job in a trouble-free environment. Founded by Andrew McMenamin and Jayne Pearce in 2001, PI has stuck firmly to its guns of doing one thing well, and it has brought this relentless attention to detail to sporting events all around the globe.

rEvolution is a much bigger player – an integrated sports marketing company with offices in London and Chicago. The London branch of rEvolution – originally, plain old Revolution – was founded in 2003 by Merrick Haydon and his late business partner, Rod Kohler and acquired by the much larger US-based rEvolution in September 2018. The two companies shared much more than just a name; their collective values on delivering world-class sports marketing services and a belief in the power of sport to grow a brand were apparent from the outset.

Merrick and Andrew have come together to work on the Tokyo 2020 Olympic Games , and they soon discovered that their complementarity ran much deeper than the operational and marketing expertise of their respective companies. “Merrick has a great reputation in the equestrian world. He was on the Junior GB squad for eventing, and really knows the sport from the stable floor up. Despite incredibly difficult conditions, he and his team delivered the media operation at the FEI World Equestrian Games™ in Tryon, North Carolina, USA in 2018; when I heard that, I knew that this was a man who not only could deliver in the rarefied world of sponsorship and marketing, but was well able to get his hands dirty at a tough event. Just the kind of person you need on team at the Olympic Games,” says Andrew. 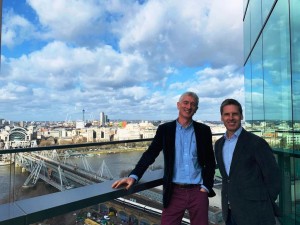 Merrick continues “I am really excited to be delivering for journalists at my first Olympic Games. It is such a huge concept – all these sports holding their pinnacle event in one city at the same time; it is going to be incredibly eye-opening to see it from within the organising committee. I am delighted to be Andrew’s Deputy Media Manager – this will be his sixth Olympic Games so he really understands how this monster works, including all the complexities from accreditation and accommodation to the integration with all the other functional areas on the ground. I hope my more in-depth knowledge of equestrian sport will be an asset, and I am planning to run perfect press conferences!”

Both men have worked in Japan before for other events, with Merrick working on the Tokyo 2020 test event last year. “The cultural aspect is not to be ignored” says Andrew. “I expect the Japanese approach to be very different to the Brazilian one, but regardless, nothing and no-one is bigger than the Games. Merrick understands this well; and the Japanese really liked working with him last year. In fact, I can’t find anyone to say a bad word about him!”

The two have had several meetings in London to get to know each other and to work with the FEI media team. “We know the Japanese like to plan well in advance, and are less open to last-minute changes than some cultures, and so we are really trying to help get it right at the planning stage” says Merrick. “We’re both delighted to have the chance to work closely with the FEI and the Local Organising Committee at this point. With 127 days to go, it is already clear that this partnership is going to work out well on the ground.”